You are here: Home1 / Knowledge Base2 / AB Testing campaign

Last Updated: 3 weeks ago in Campaign

The AB Testing campaign allows you to run different versions of the same campaign, to check which part of the campaign works better and which does not. This is actually a statistical experiment that compares multiple versions of the same campaign, with the goal of identifying and implementing the version that works best and achieves the pre-defined goals.
With inwise you can test up to 8 different versions of a mailing campaign, and check on a sample which of the versions is more effective, before sending the mailing to the entire mailing list.

Step 1 – Choose the criteria for the exam.

1. Choose the criteria for the exam.

Option 2 – Under the “Campaigns” pane on the main login screen, click on the arrow next to “Create Campaign.” Then, click “Create an email campaign” on the menu that opens (2).

What would you like to test?  on the create AB campaign screen, choose the criteria for the exam.

After choosing the test criteria, we’ll define the Test Segment under Split Rate.
The test segment is a selection from your contact group that will receive the campaign (AB campaign will be sent only to one group of contacts). You can define the test segment yourself.
In the example, we set a 20% test segment, meaning that only 20 % of the contact group will get one version out of four versions of the campaign.
After sending the campaign to your test group (the 20%), the winning version will be sent to the remaining 80% of your contacts.

Another option for testing is sending the campaign at 2 different times, so you can test the optimal day and time to send your future campaigns.
With this option, the system will send the campaign to 50% of your contacts at one time, and to the remaining 50% at another time.
This option does not allow you to choose other criteria, nor to set a test segment (size of the test group).
The results obtained can be used to determine the optimal submission time for subsequent campaigns

Click next at the bottom right corner of the screen.

After setting the criteria, you can start to edit the campaign:
Fill the subject lines you want to test.
In the Campaign name (internal), fill the Campaign name that will appear in the system. This is for internal use only.

If you choose to test the “From name” set the sending profile for each test group. 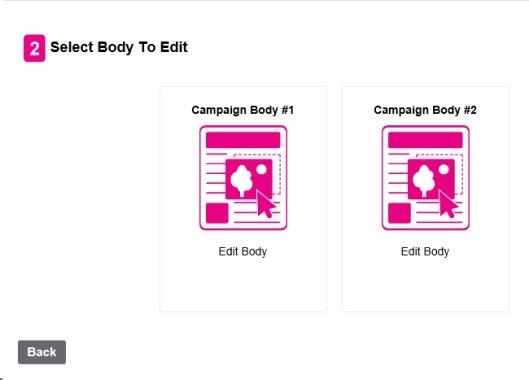 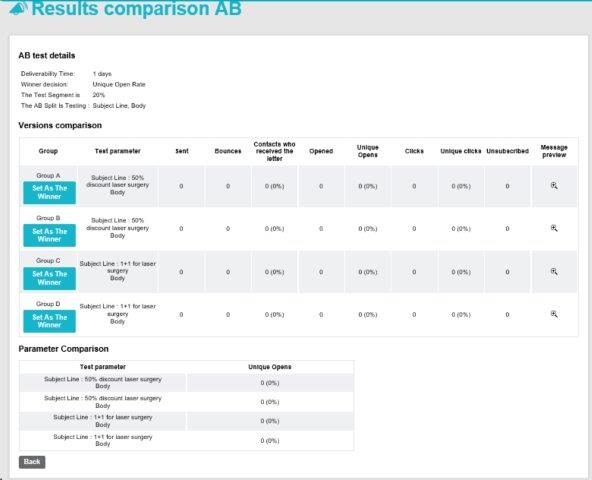 After determining the winner, the system will send the campaign to the rest of the contacts who were not in the test campaign.
Upon examining the behavior of your recipients, you can divide them into groups: those who opened the email, those who clicked, and those who did not open emails from you at all and accordingly send each of these groups a uniquely targeted SMS.

How to do it? – check our SMS sending guide